One of the things I find truly interesting about us humans is our ability to hold two opposite, conflicting ideas in our heads (or hearts) and believe in each one fervently. In the extreme sense... as in leaders who spout moral codes, but behave quite differently behind closed doors.  Or those who are against reproductive choice because they believe in the sanctity of life, but support the death penalty with equal passion.  How you can be sooooo mad at someone, but still love them truly, madly, deeply.  Or even something benign like knowing that something is not good for us, but choosing it anyways... hello chocolate brownie #3.  Somehow, despite the obvious contradictions, this strange kind of balance finds its way into being.  The psychology behind it all, the human-ness of the contradictions, that is what I find endlessly fascinating.  That we are not black & white creatures... we live more often in the in-between, nebulous, gray areas.  Sometimes being governed by the exceptions to our rules, more than the rules themselves.

This oppositional balance became extremely clear in our early days with Quinn.  Holding in our hearts simultaneously the intense joy at having a healthy, happy baby boy, and the deep crushing pain that life would be very different than expected.  We learned pretty quickly that the two things are not mutually exclusive.  That carrying around two seemingly opposite wells of emotions is an entirely human thing.  For us, the pain slowly ebbed & the joy quickly flowed, but that well is still there, not yet completely dry.  Even now we occasionally have these moments, these DS moments, that take us by surprise.  Surprise because, in the course of daily life, I usually forget about Down Syndrome.  The routine of raising kids makes it pretty inconsequential most of the time.

Lately this conflict has been stirred up for me as we prepare to have Quinn's next IEP meeting for school.  The big meeting where we talk about him moving on to Kindergarten & what that might look like.  We are pushing for full inclusion with an aide, but have concerns about him being ready for such a big challenge.  In my heart I know he can do it, but worry about the reality of an ailing education system that might not be able to provide all the supports he needs to help him be successful.  On top of the school stuff, was the milestone of moving the boys to twin beds.  Packing up all things baby... the crib sheets & blankets that have been in use since we first brought these bald little creatures home from the hospital... it has all left me a bit conflicted about my babies growing up.  About how different the two boys are.  About whether we will be adding to our family, or accepting that this is it for babies.   Feeling like my emotions are floating close to the surface, raw & vulnerable, snagging easily like a hangnail.

I love my sons with every fiber of my being, even the extra bits, sometimes especially the extra bits.  But every once in awhile my heart aches for Quinn and I get so mad at Down Syndrome.  I want him to be able to have a "real" conversation with us about the joys of play-doh like his brother.  I want him to be able to tell us what he wants without having to guess or to interpret his "nah-nahn", or to go through every sign we know like a goofy game of charades.  I want to know what he thinks and feels, because the kid clearly has strong opinions about things.  Sometimes I ache for how the world sees him, how people often stare at him, and for how he might be treated as an adult.  And that's when I have to stop, and breathe, and think about how very grateful I am that Quinn was born now.  In a time when there are increasingly fewer people left who feel he should be sent to a separate classroom, let alone sent away to an institution.

Love & hate, joy & ache, ebb & flow... all part of that elusive universal quest for balance I suppose.  Holding two opposing things in parity keeping us human, a reminder to pay attention to our own truths.
Posted by KWQR at 9:13 PM 2 comments:

When I Grow Up

When I was little, like millions of other girls around the world, I dreamed of someday being a ballerina.  Except I also wanted to be a Blue Angel pilot.  And a writer.  And an Olympic gymnast, photographer & film director too.  I was lucky to have parents that supported my dreams, no matter what direction they seemed to wander.  Lately Remy has been asking the “when I am big, can I...” questions.  Things like, "when I am big, can I drive that garbage truck?" or "when I grow up can I drive the train at the zoo?"   But the one he asks the most is “when I am big can I work at the refinery with Daddy?”  (To which I answer, “of course sweetie… just after you finish medical school.”)  These daily questions have made me start to think about what I might want to do "when I am big."  My chances of a career in ballet or acrobatic piloting may have passed on by, but there are a lot of other possibilities that drift through my brain.  Wishing I could try out different vocations as easily as a new outfit.
With my fondness for naps, silly music & kid snacks, sometimes I think how nice it would be to stay here forever in the land of sort-of-work at home mommy-ville.  To rest within the safe confines of school schedules & meals, pick-ups & drop-offs.  Sporting nothing more complicated (or fashionable!) than yoga pants & comfy sweaters.  Other times I long for something more… something that requires me to dress nicely, face new challenges, and use a different portion of my brain to interact with grown-ups.  To spend my days with people who do not need me to wipe their noses or dole out graham crackers.
This state of conflicted-ness seems to be a common feeling for a lot of my generation.  We grew up being told we could have it all, be it all, do it all.  But sometimes "it all" is too much.  We become paralyzed by too much choice, sometimes getting stuck in the familiar & comfortable.  Overwhelmed by the attempt to live up to the slippery ideal of perfect balance.
This is the first time in my life that I have not known in what direction I would like to go next.  The nearly endless possibilities leave me dizzy with indecision.  Do I want to go back to production? (too many hours away from family) or back to school? (ha! No thank you) or, or or?  The truth is what I keep coming back to is that, aside from the snotty noses, I am living my dream.  I get to do & learn a million different things as a mom… especially as a mom to a child with countless therapies, medical specialists &  educational challenges.  My most recent foray into school inclusion & the hunt for successful models has led me to so many interesting people & a lot of useful information.  This, coupled with our antiques business, is my dream.  Too bad my passions don't rest in a more recession-proof field.

The past couple of weeks have been a wonderful blur of not doing too much & doing a lot... all while happily welcoming Daddy back in the fold.  He finished his latest job of 5 grueling weeks of nights with only two days off and one marathon 36 hour workday when he did the Alameda antique fair in between two night shifts.  (Yes, he is insane!)  We are so grateful to have the additional income & even more grateful to have him home again. 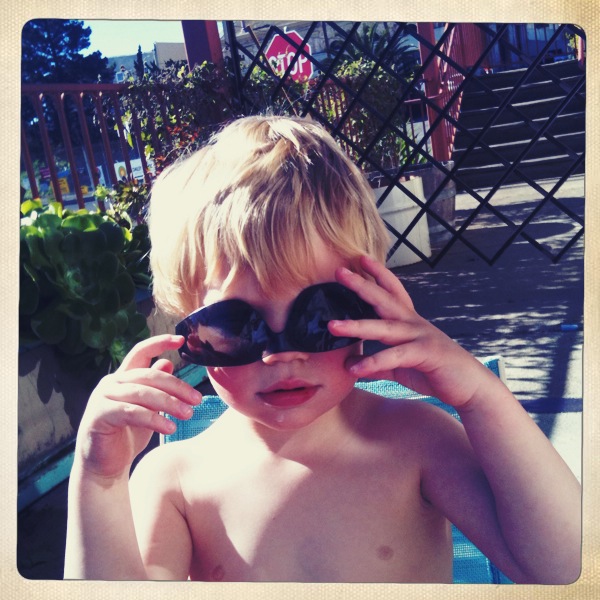 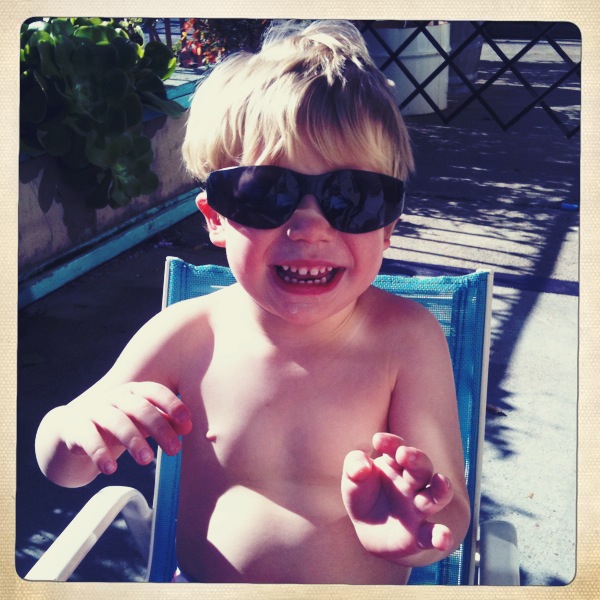 Being a grown-up is way over-rated... here's to staying little for at least a bit longer!
Posted by KWQR at 8:29 PM No comments:

Sometimes the chop wood, carry water –ness of everyday life with kids moves along with a comforting hum.  Other times the exact same motions can seem monotonous, tedious, overwhelming.  What is it that makes a “good” day or a “bad” day?  We are the same people, most-often the tasks are the same.  Can it be as simple as the variance of moods? Frame of mind?  Quality or quantity of sleep?  Position of the moon?
I don’t like succumbing to the feeling of “just getting through” a day.  I try to pay homage to exactly how precious it is to simply have another day.   But some days are not so easy... and the "getting through" is triumph enough.  As we are nearing the end of William’s latest project (5 weeks of nights, 13 hour shifts, 7 days a week) we are all feeling the strain.  A thick film of exhaustion coats my days, coupled with frenzied “they are finally asleep” nights where I stay up way too late trying to get things done.
The boys have been relatively germ free since the holidays, but this week Remy went down hard.  He tends to go from sniffles to a chest-rattling, wheezy cough of full blown asthma very quickly, so cautionary trips to the doctor are frequent.  I will do pretty much anything to avoid the nightly coughing fits that render him simultaneously inconsolable, & pleading “hold me, hold me.”  These late-night bouts leave me bleary-eyed & quick-tempered the next morning, doing my best to hold on to my oh-so-thin thready link to sanity.
But the past couple of days the sun has been shining bright, the perfect foil to my cranky moods.  It's hard to stay grumpy when it is a glorious 75 degrees and the rest of the country is buried deep under a cold white blanket.  We have re-filled the sandbox, found our dollar store paintbrushes and sidewalk chalk... doing our best to enjoy our brief glimpse at the promise of spring ahead. 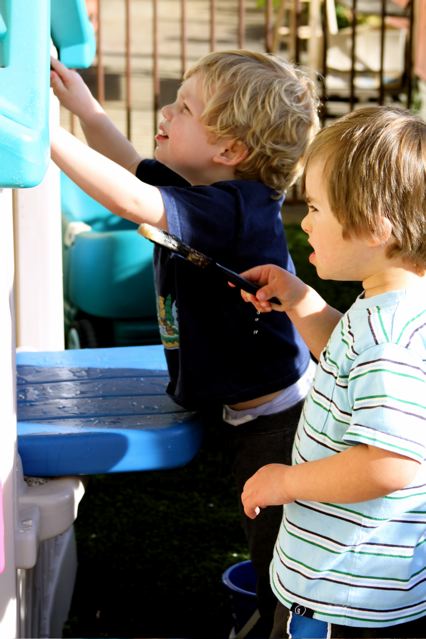 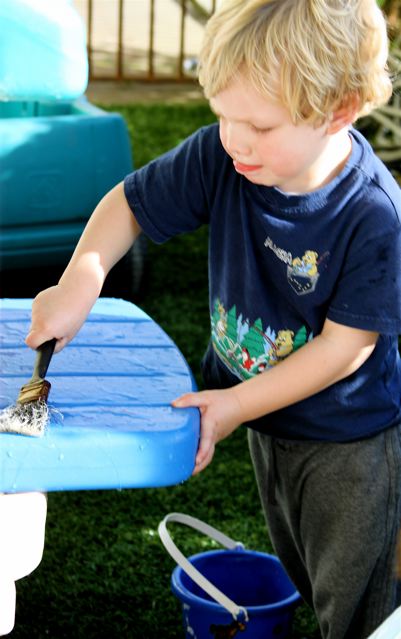 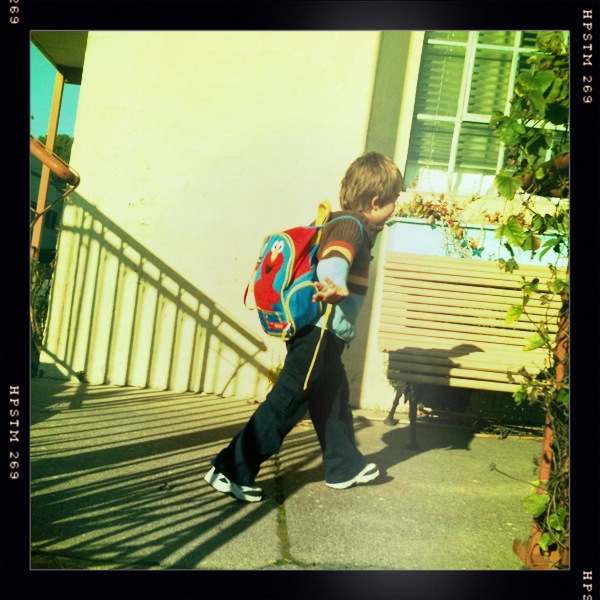 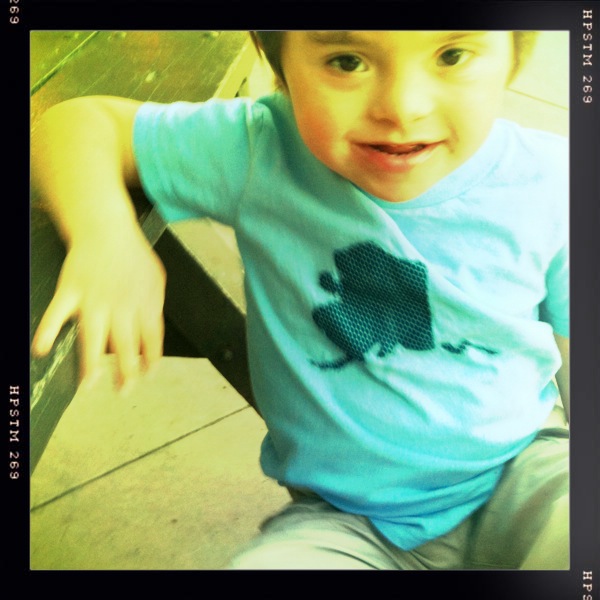 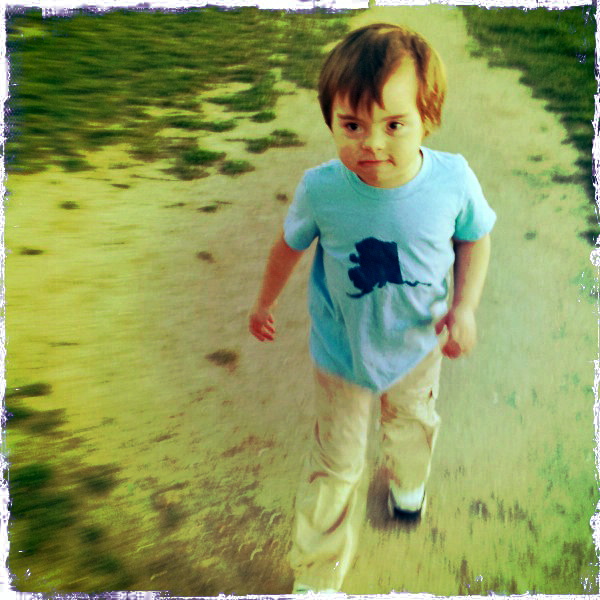