Having a wonderful weekend filled with fun, friends & Christmas preparations... and even got an early present of having Daddy home a week earlier than expected.  He came home from work Thursday night as usual & waited two whole hours before letting me know he didn't have to go back until mid-January.  Am beyond happy to have my partner-in-crime back for the holidays.

Yesterday morning we rallied the troops & made it downtown to catch the end of our town's annual holiday parade.  The marching band, Santa and the antique tractors were the big favorites. 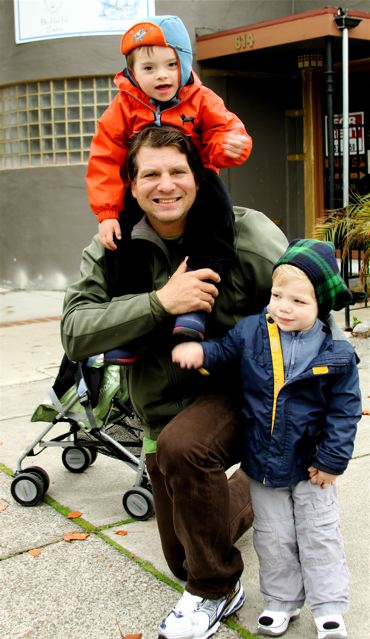 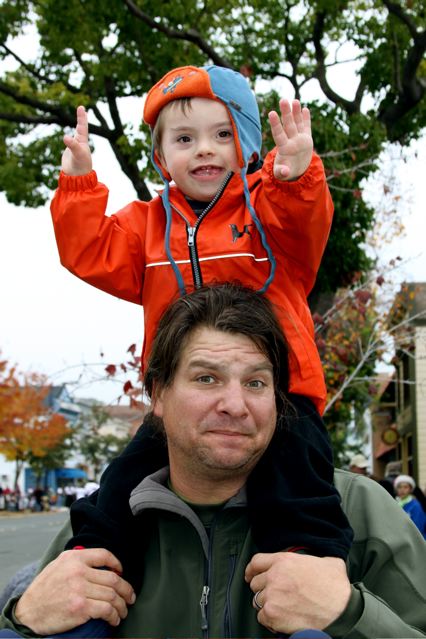 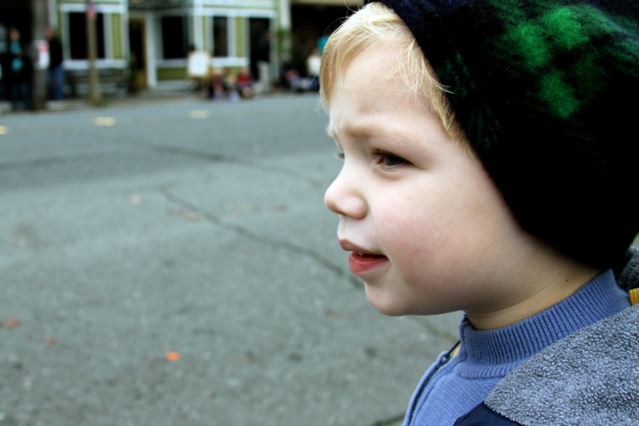 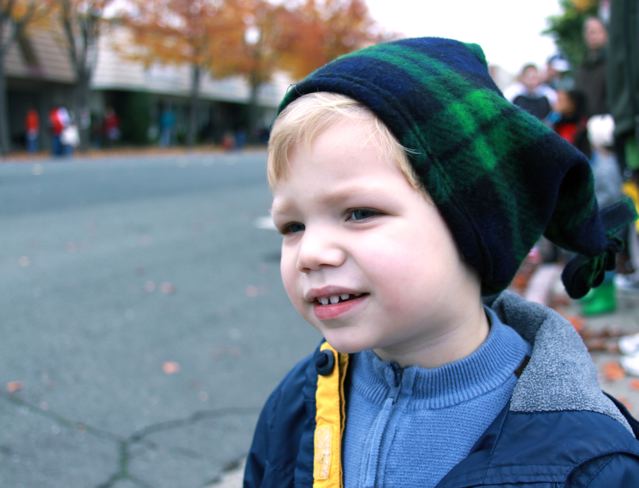 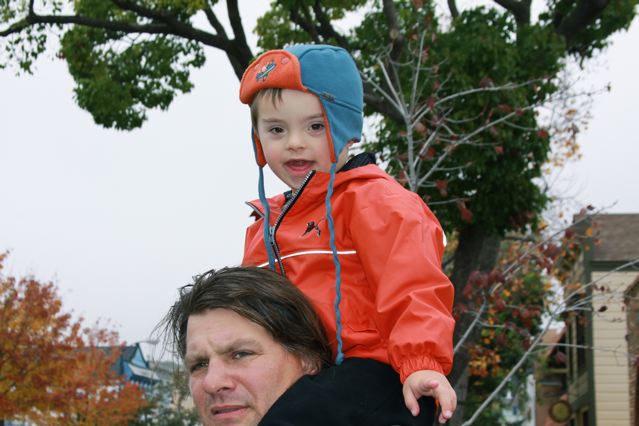 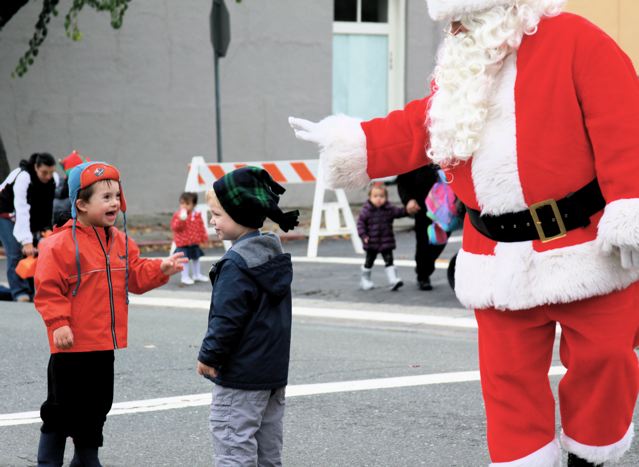 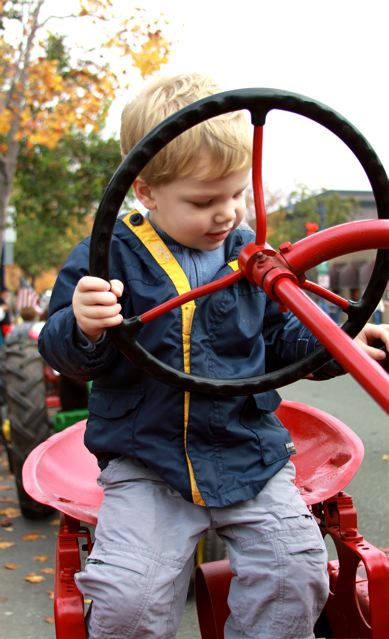 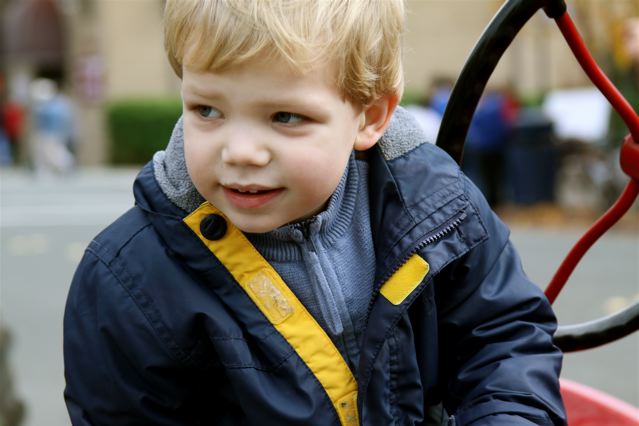 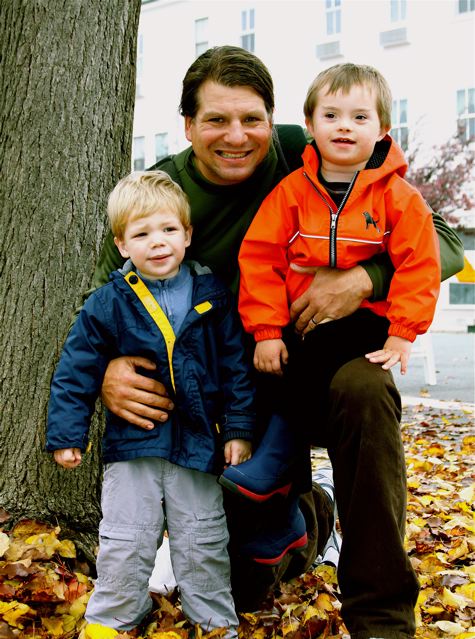 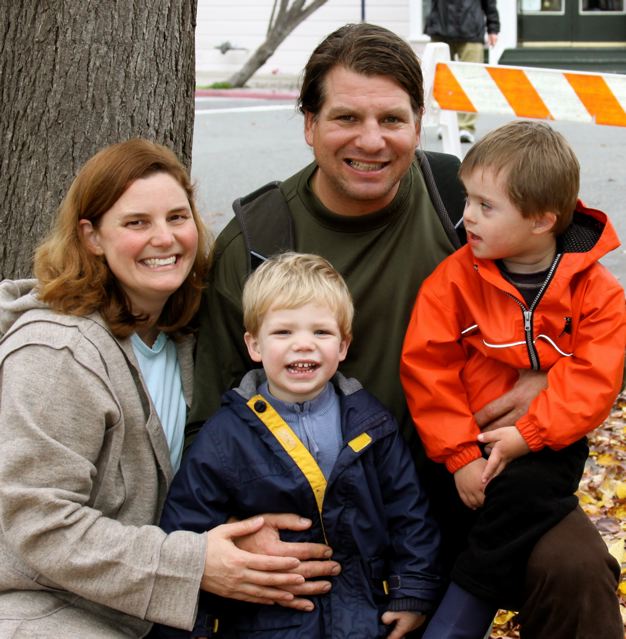 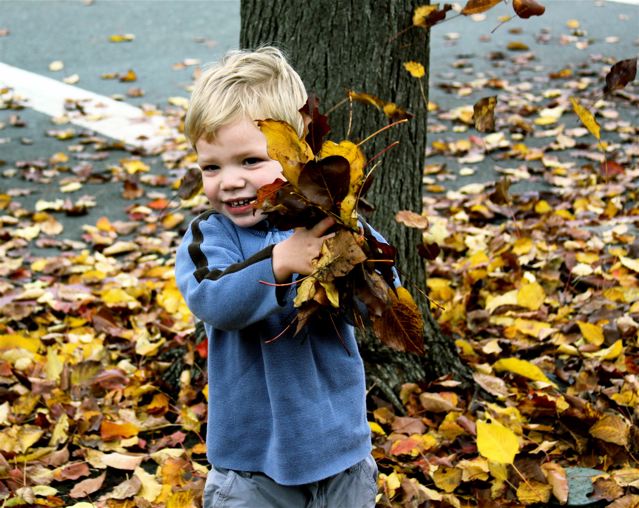 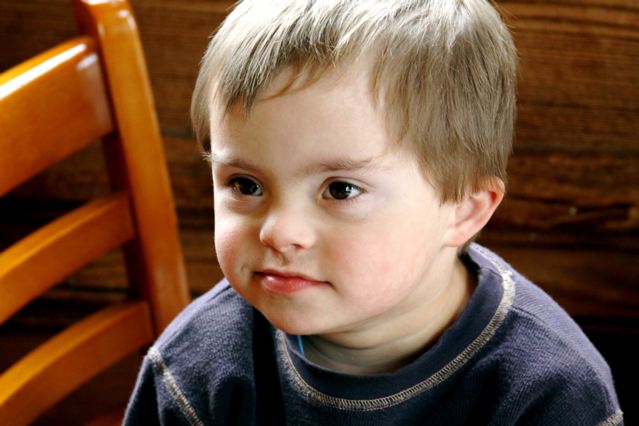 Off to enjoy the rest of Sunday with my silly boys... all three of them.
Posted by KWQR at 12:54 PM No comments:

Turns out that the old childhood saying, "Sticks & stones may break my bones, but words can never hurt me" is really a load of crap.  Words do hurt.  What we choose to say & put out into the world is a reflection of what we believe, what we think, what we feel.  I really wish that people would choose their words a bit more thoughtfully.

I am talking about the word "retard"... or "retarded, tard, sp-ed, riding the short bus, etc."... all words that people use freely and without much thought in our culture to mean "stupid".  I know, I know... it's a free country with freedom of speech... of course you have the right to say whatever you want.  I used to say it... usually about myself, or a situation, never about another person.  But then Quinn came into our lives.  And made us start to think about what people really mean when using that word.  That the diagnosis of "mental retardation" appeared on some of the forms we have had to fill out.  The realization of what that word means in our society, or more accurately, what people really mean when they say it.

It always seems to go down this way... on a day when we are really proud of some new accomplishment or progress that Quinn has made... you hear a kid say it at the park, or a teenager on his cel phone, or a grown woman at the grocery store, or amongst your friends on Facebook.  Doesn't really matter the source.  It stings every time.  And hits hard the fact that no matter how much progress we make in our own little world, there is still a big world out there that thinks otherwise.

So we thicken our skins, toughen-up & pick our battles.  So far, when we have pointed this out to friends & family along the way, most are really thankful to have a new perspective on it.  One response we sometimes get is, "but I didn't mean it about Quinn" or "I don't think of him that way".  But here's the thing... Quinn is in a special education class.  He does learn things more slowly.  If he rode the bus to school, it would be the small one.  See where I'm going with this?  My new response is to say, "oh, did you mean one of his classmates?"

I don't have all the answers.  I am not perfect.  I am not the language police and will not hate you if you decide to use this word.  All I ask is that you take the time to think about what you are saying.  About what you really mean to say.  To think about how you would feel in our situation.  Kids can be tough with each other, but as adults I think we all have a responsibility to teach kindness in every area.  Kindness, acceptance, respect... things we all benefit from practicing every day.
Posted by KWQR at 11:33 AM 2 comments:

I have long been a believer in the whole "it takes a village" deal.  Being social creatures we need help, connection and the safety valve for the stresses of life that having a support network provides.  Before kids I was more often the help-er than the help-ee.  My pride and stubborn nature often getting in the way, even in times when I really could have used a hand or a shoulder or an ear.  One of the greatest gifts that Quinn's entrance into the world has given me is the acceptance of needing my village.... of admitting that I can't do it all alone.  That there can be just as much joy being on the receiving end, as on the side of giving.  We are incredibly blessed to have an amazing group of friends & family around the globe.  Although our family is spread far & wide across this country, we manage to get together whenever possible.  I often daydream about how incredible it would be if we all lived in the same area.  Or, at the very least, on the same coast.

Thankfully, a part of my village showed up just at the right time this holiday season.  The past several weeks have been a whirlwind of doctor's appointments, school and the regular stuff of life... made more challenging by having to do it all single-parent-style.  We are nearing the end of William's latest job & are all so very ready for it to be done.  The longest project to date... he is currently going on nine solid weeks of work with only 4 days off the entire time... the job was just extended two more weeks & his shifts were upped from 12's to 13 hour days.  (Yay for the overtime.  Boo hiss for the time away from home factor.)  To say we are missing Daddy, is beyond an understatement.

So when my brother-in-law proposed the idea of he & his two boys coming to visit for Thanksgiving, I couldn't get the word "YES!" out of my mouth fast enough.  Normally the prospect of spending 5 days with 6 boys in my house would send me running for the nearest Lilith Fair concert, but even the thought of having help with my two wild monkeys for a few days made me tear up with joy.  (You know it's time for a break when you see the guys lined up outside of Home Depot looking for work & the thought crosses your mind, "I wonder if any of them would be up for babysitting?")  Tickets were booked & my prayers were answered.

My two little boys were over-the-moon to have their two older cousins to play with.  Endless attention and patience for tower-building, wrestling & boy games made it possible for me to get all of the Thanksgiving shopping done on my own.  Remy got to spend an entire day out with the "big boys" while Quinn & I went to his hearing test.  (Great news on that front, one ear tested within the "normal range", he now only needs his hearing aid for speech-intensive activities.  He has started telling me when things are "loud", proving that his ear tubes are doing their job.)  Remy was up with fever & an earache the night before Thanksgiving so I knew a holiday trip to the doctor was inevitable.  Walking into our house, after a long wait for the doctor and even longer wait in the pharmacy, & being met with the smells of turkey, stuffing & all the fixings in the works, I felt so overwhelmed with gratitude.  (Thank you Rick!!!)  Reminding me, once again, that not only can the men in my village take care of themselves, they are also quite skilled at doing the "taking care of"... something for which I am ever-grateful.

We managed to squeeze in a lot of lounging, eating & adventuring during their stay... all of the ingredients for an amazing Thanksgiving week. 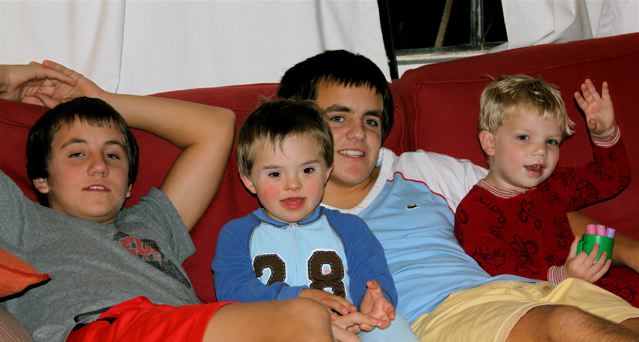 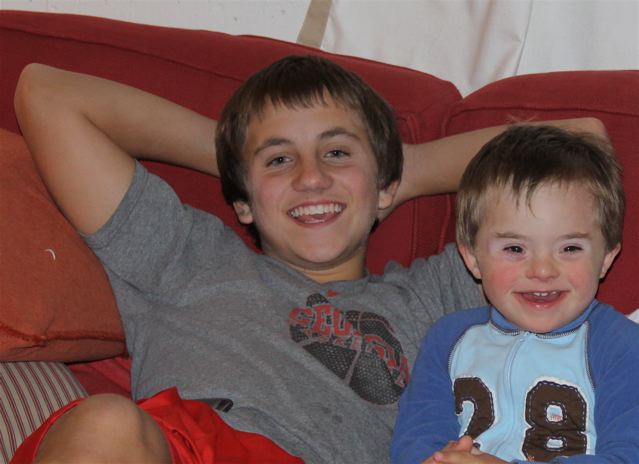 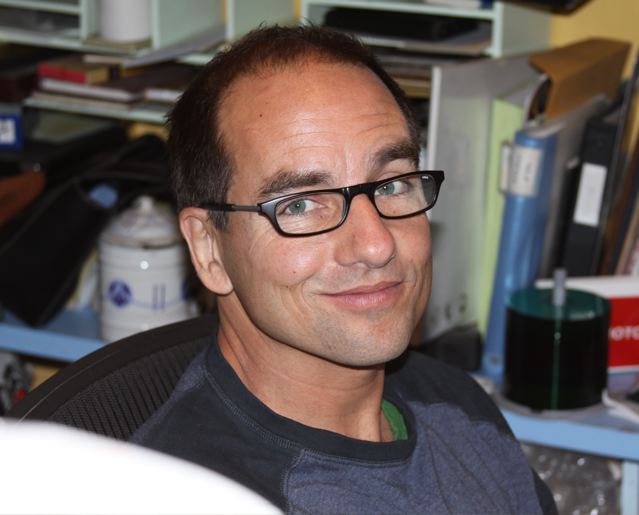 We even fit in an outing to the city to visit the "big zoo" as Remy has named it. 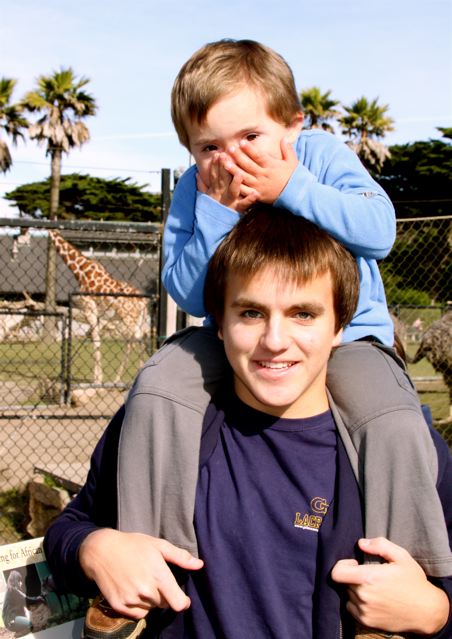 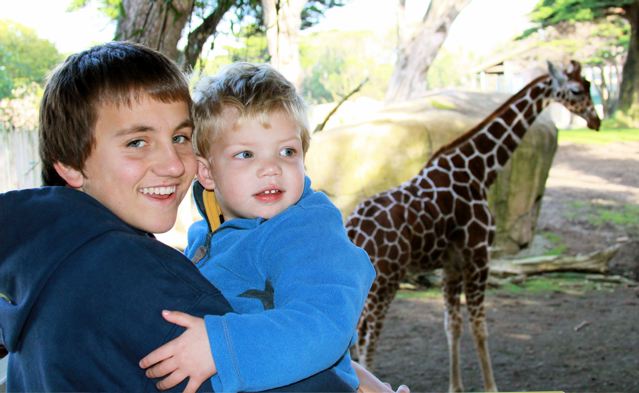 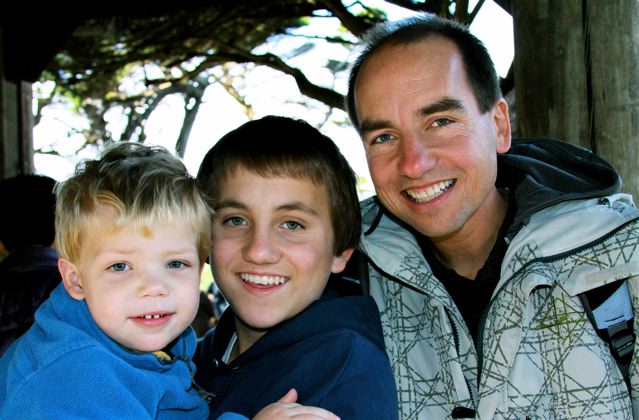 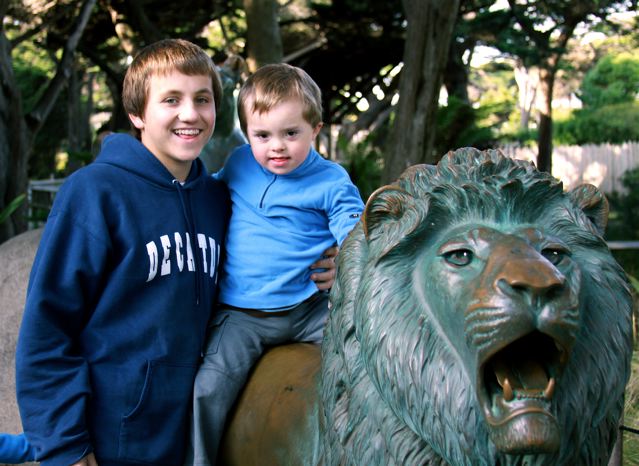 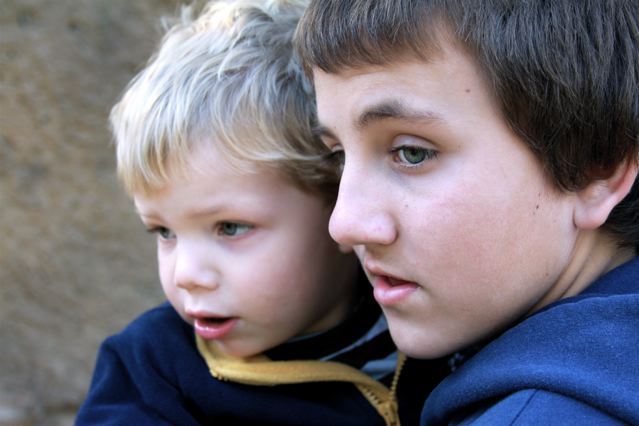 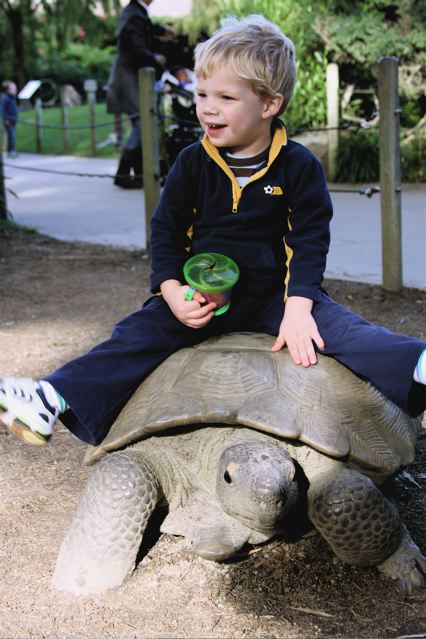 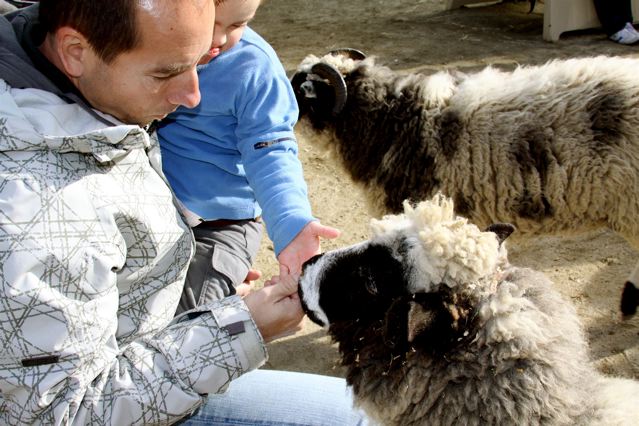 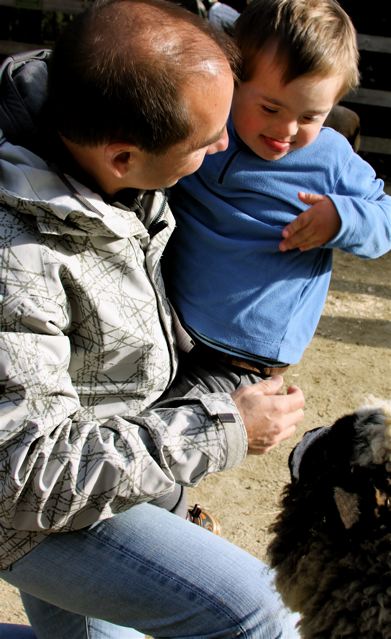 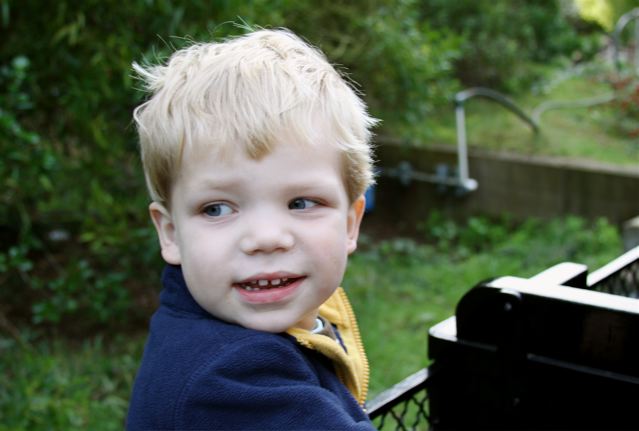 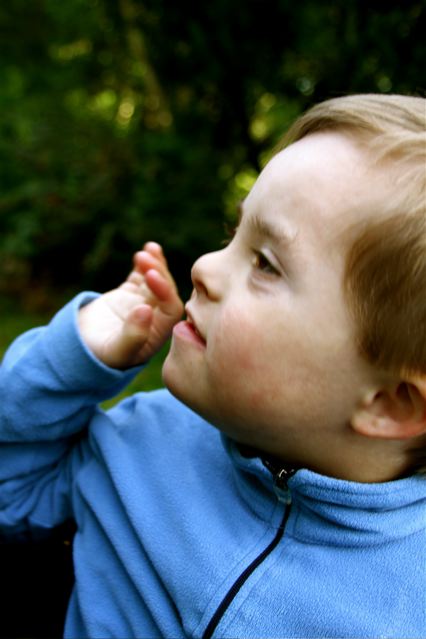 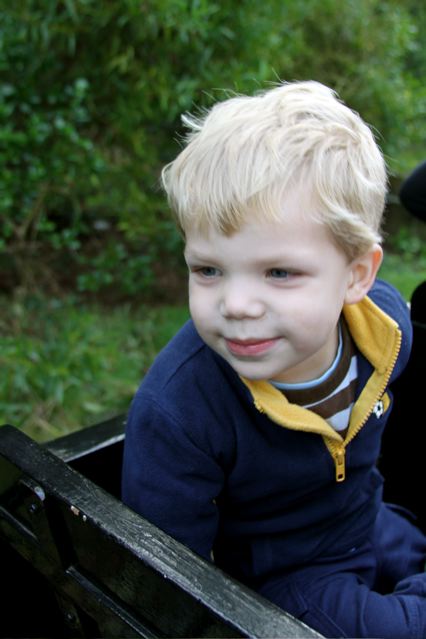 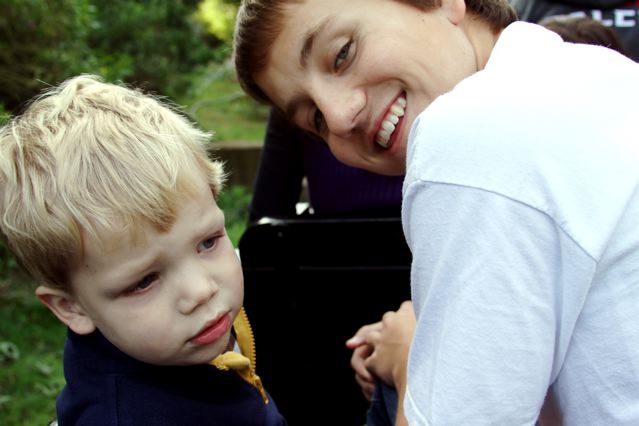 Ever since they left my boys have asked daily, or more accurately, hourly the first day, where are their cousins?  ("Where Sam?" asks Quinn, pronouncing the "s" and the "m" just perfectly, much to our delight.)  So we are back to park outings, making mud soup and, although still missing Daddy, recharged & ready to face the next two weeks. 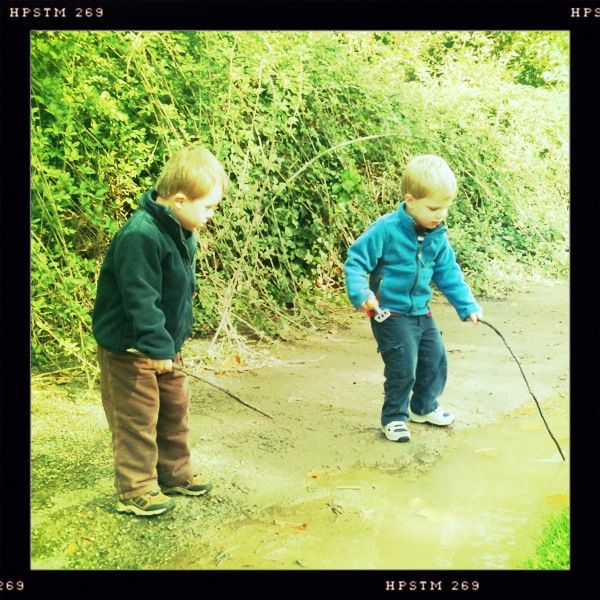 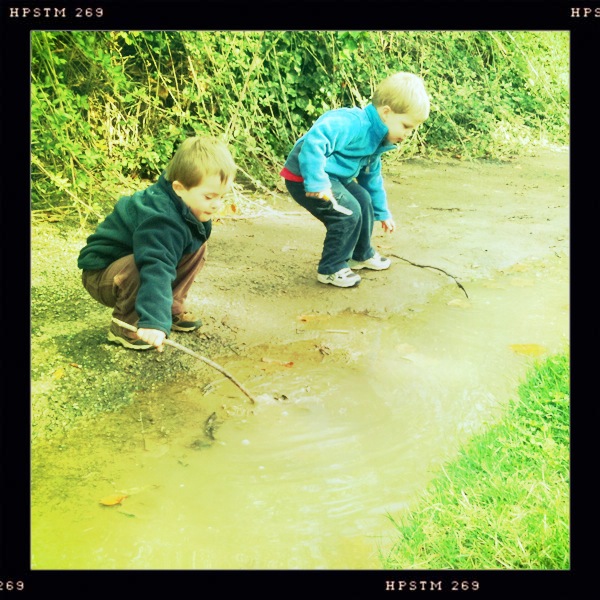 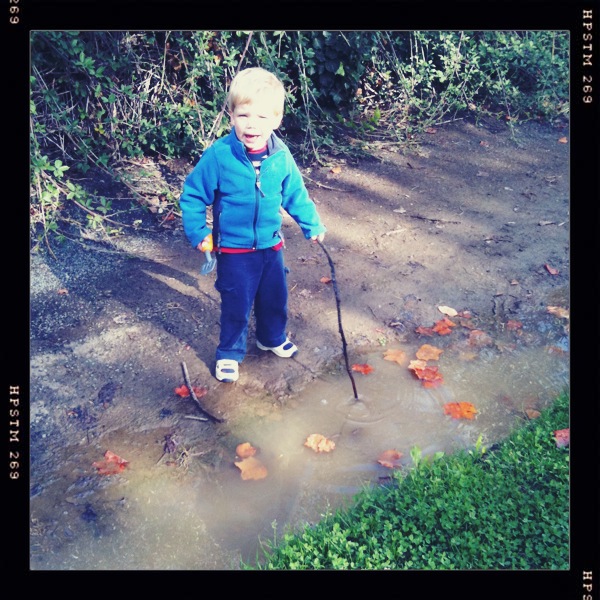 Looking forward to the next village gathering.
Posted by KWQR at 5:31 PM 1 comment: